Feeding livestock in drought. What you should know.

As the drought continues and decent rainfall remains a distant memory, there is much to keep in mind when considering buying in feed for your animals.

Hay is not only expensive at the moment, but can be deadly. When it is cut under nutrient or moisture stress it can become loaded with nitrates (many types of hay) or prussic acid (mainly sorghum and its relatives).  We have had 2-3 cases of an owner finding up to 15 dead cattle overnight from a new bale of hay.

While grain is high in energy, a sudden introduction to grain causes a sudden change in rumen bacteria, which leads to acid production and acidosis (or grain poisoning). Cows get very crook from this, and many die, often over a couple of agonizing days. The effects of grain poisoning can be eliminated by correct introduction of grain-based diets, and consulting a nutritionist is very important. Correct processing of grain (eg rolling instead of hammermilling), provision of sufficient roughage (mixed in the diet is better than hay in racks) and feed additives like Rumensin and Virginiamycin are very important to avoid grain toxicity. The processing and mixing of these diets correctly requires an investment in machinery and infrastructure, and if not available, feed is best bought ready mixed. It is vital to gradually introduce grain into the diet over a period of time rather than suddenly starting a high grain diet.

Urea is used as a ‘Non-protein nitrogen’. It is converted to protein in the rumen by bacteria, and is particularly useful if standing dry feed or other roughage is available.  It is used in additives in dry licks, lick blocks and molasses mixtures. Urea is usually safe, but if fed from multiple sources can also cause a nasty syndrome that can be fatal. So it is best to check the label contents of all supplements for urea concentrations.

When people undergo diets such as the low sugar/glucose Atkins Diet, the result is the production of ketones from the body’s fats and proteins (as well as weight loss). In high levels, these ketone bodies also cause illness and death. We see this in cattle with high glucose demand, and especially heavily pregnant and lactating heifers and cows. The effects are particularly marked when fat cows lose weight rapidly. The cows behave erratically, become weak and die. So in this case, grain and its high carbohydrate levels can be a saviour rather than sinner. Molasses is also a good source of carbohydrate.

5-in-1 vaccines are essential when drought feeding. High carbohydrate diets, especially with sudden change feeding, are ideal for overgrowth of clostridial bacteria which cause Pulpy Kidney, Black Disease and the like. Vaccination is very cheap insurance. The sight of a sea of dead cattle is indeed heart breaking.

Taking reasonable precautions when buying in feed makes good business sense. Be sure to obtain a Commodity Vendor Declaration (CVD) for your piece of mind. If you are considering unconventional feeds, you should ask for a completed By-product Vendor Declaration (BVD) before buying so that you have the information to make an informed decision as to the risks and benefits associated with this feed.

If in doubt, be sure to give us a call to discuss the needs of your livestock. Contact Us 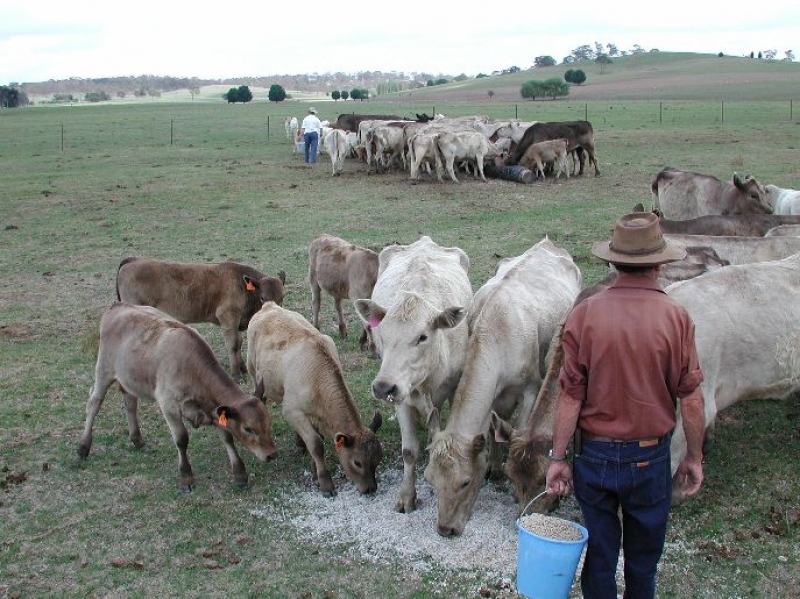